The official ticket selling began with an official press conference. The tickets serve as donations for the charity concert organised by the “Zdążyć z Miłością” Foundation. The Firmus Group is once again the main sponsor of the event.

This is the fourth concert organised by the “Zdążyć z Miłością” Foundation. The Foundation manages sheltered housing for single mothers in a difficult financial situation. The proceeds from the project will be earmarked for the renovation of the roof and attic in the tenement where the housing is located. A clubroom will be arranged there for the Foundation’s wards.

This year, Zakopower and Atom String Quartet will perfrom on stage. The price of the donation tickets for the concert, at PLN 120 and PLN 100, are available in the head office of the “Zdążyć z Miłością” Foundation and at the Koszalin Concert Hall’s cash desk. 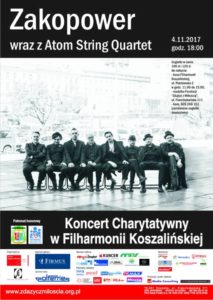