Among this year`s winners of the prestigious award Orły WPROST (WPROST’s Eagles) there was one of the companies owned by the property developer group Firmus, responsible for the implementation of the first stage of the Dune Resort. During a ceremonial gala held last night (6 December 2017) in Swinoujście, a congratulatory diploma was received by Aneta Leśna, representative of the Firmus Group.

The award is granted to the best companies in each province. They are nominated by the international real property advisor Bisnode after analysing the companies` financial performance over the past three years.

The award of Orły WPROST refers to the awards previously granted by the President Ryszard Kaczorowski Institute to the individuals, companies and institutions who greatly contribute to the economic development of Poland and also to those who engage in the local community matters, are active in the charity area and promote high standards in business. 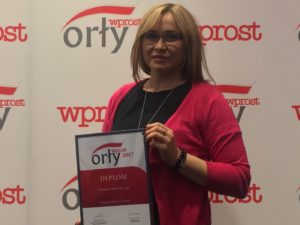